3 Reasons Dragons Rescue Riders: Huttsgalor Holiday Is A Must Watch!

Dragons: Rescue Riders is the new Netflix series that is part of the How to Train Your Dragon franchise. It’s extremely cute and a fun time-pass that is most suited for preschoolers, preteens, and anyone who enjoys animated movies!

The most interesting part of the series is that it’s unlike its predecessor. 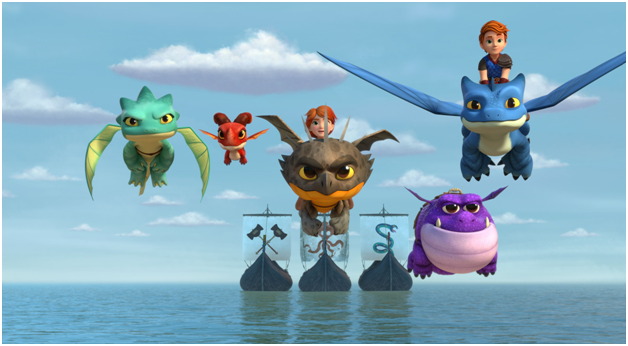 It features 10-year-old twins, Leyla and Dak, who are raised and brought up by mother dragon. The character rescues them from a terrible shipwreck. You can say that Rescue Riders is essentially a superhero series that is set in the world of Berk. It is settled on a separate island, Huttsgalor, that is showcased to be the Viking Empire's edge, where the human-dragon associations are established by Hiccup that has not spread broadly.

Leyla and Dak, however, understand and are well-versed with dragon speech, which means that viewers can consider this to be the franchise's first installment where dragons speak.

Due to some unknown reason, Dak and Leyla have separated from their dragon mother as well as the rest of the family, including dragon brother, friends Cutter, Burple, and Summer are spending their time rescuing the dragons in desperate need of help.

At the end of their first human rescue operation, they find out that he is the Chief of Huttsgalor. After this discovery, the dragon friends of twins and the twins themselves decide to live there with him, even though they feel uncomfortable living with humans. Of course, there is a human antagonist called Magnus Finke, who isn’t fond of dragons on the island. There are also Slinkwings who have the ability to go invisible and are always stealing stuff. The twins also discover a collection of dragon eggs that they try and keep safe from the Slinkwings.

The show has a couple of problems as far as the writing is concerned: There’s no denying that every episode ends with good moralistic lessons for children, but the execution somehow falls short. Yes, they’ve preached about the importance of friends and how important it is to ask for help and not be greedy, but the delivery feels forced and rehearsed.

Furthermore, some episodes seem to be inconsistent with the overall beat of the show – especially the ones that have baby dragons.

Also, the writers failed to introduce new characters and their arc was also unsophisticated.  For example, the fascinating character of Marena could’ve been portrayed better. She was an older Spanish woman having an eyepatch that indicated her past adventures. She deserved to have an entire episode dedicated to her, but the writers failed to explore her potential.

Lastly, the ending of the show has room for improvement. Like, it was shown that the baby dragons end up going away with another elderly dragon instead of finding a place with the twins and friends – not so adventurous!

Anyhow, you could still call Dragons: Rescue Riders a fun and enthralling show to watch. The minor inconsistencies can be overlooked and we hope to see another season full of adventures! Make sure that you and your toddler watch this show and learn a lesson or two!