December 2nd is the day when—the girl who fell in love with a criminal—Britney Spears was born! Here's our birthday wishes to her! And in her truly benevolent style, she is the one giving us an unexpected gift!

In honor of the pop star’s birthday, her label RCA records dropped a previously unreleased track, “Swimming in the Stars.” And fans are thrilled!

Originally recorded for her 2016 album, Glory, “Swimming in the Stars” is the second song that was supposed to release after “Mood Ring (by Demand),” which was not included on the original release or deluxe edition at all.

It wasn’t until November 11th when a vinyl edition was made available for preorder on the Urban Outfitters website for Singles’ day. You can grab the pre-order for $16.98 with shipping expected to start from January 15th.

To the fans’ surprise, the album received a cover update in May, changing from Spears’ head shot to a full-body image against a desert oasis background, featuring the Blonde-haired artist tied in chains in a gold-leaf bikini. 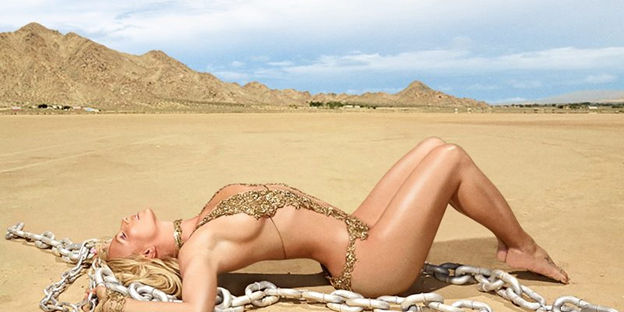 But now after four years, on the artist’s birthday, the song is making its streaming debut, and it’s got incredible mystical vibes with a shimmery synchronic sound ideal for stargazing when the lights get dimmed and the clock hits 3 a.m.

The Grammy-winning, multi-platinum artist has around 150 million records globally, selling over 70 million albums, songs, and singles in the United States alone!

In an adorable video posted on her boyfriend’s Instagram, Britney Spears was seen singing “Happy Birthday” before being interrupted by him saying that they have been celebrating her birthday for about a month.

“I’m doing that whole work on yourself thing at the moment,” she announced on Instagram at the time.

On Tuesday, She also uploaded a couple of adorable snaps with boyfriend on Instagram, just a day before her birthday.

Captioning it with, “Happy Birthday to me,” she added several festive emoji including cakes, flowers, and stars to express her joy.

In one of the pictures, 26-year-old boyfriend is kissing the singer’s cheek. He also uploaded a birthday tribute on his own Instagram account.

Beyoncé used her ultra-slick personal website to wish the artist with a black and white picture of a baby Brit.

Beyoncé (also 39) and Spears both rose to popularity in the beginning of a new millennium, and both have equal respect and admiration for one another.

On International Women’s Day in 2017, Spears took to twitter and paid tribute to two of the biggest inspirations in her life: Beyoncé and Madonna.

She tweeted, “Two of the many women who inspire me. Always fierce throughout their careers. Thank you for being amazing.”

A never-before-heard single “Swimming in the Stars” came as a total surprise and marked the first single of the artist since 2016. While the pop star hasn’t really dropped any new music in the recent years, she still remains as one of the most admired entertainer in pop history.

Recently, she made headlines for her ongoing legal battle against her father. Her lawyers were trying to halt the conservatorship role of her father which he held for over 12 years. Her father, Jamie Spears, became the legal guardian of his daughter, because of concerns about her mental condition that resulted in the loss of custody of her two young sons to their father, Kevin Federline.

Apart from her music career, Spears has been a social activist for quite some time. She utilizes her platform to raise her voice against social justice issues, such as lending her support to the queer community and the DREAMers Act. Because of her activism, she was awarded with GLAAD’S 2018 Vanguard Award, an honor given to celebrities who use their platform to promote justice for LGBTQIA+ people.

So did you like the Britney Spears 39th birthday surprise?