A lot of people from us must have been incredibly happy seeing a ‘gay woman’ getting the taste of her medicine. It’s probably the time we should all give a brief thought about our sexist double standards!

Ellen DeGeneres has been in plenty of hot waters lately since the backlash and accusations from her current and former employees for “workplace toxicity” started surfacing on the internet. A renowned publisher also wrote an investigative piece about it.

So, she apologized and directly addressed the accusations in her season 8’s premiere episode. In her monologue, She talked about the numerous allegations relating to toxic work environment and then apologized to the people offended. Ellen DeGeneres who is known for her lively onscreen personality and “be kind” catchphrase, also denied accusations that she is not a devil in reality.

Unfortunately, her onscreen apology hasn’t received well among the Twitteratis. Apparently, people were not impressed or convinced with the apology, highlighting the absurdity involved with the fact that she’d be starting a “new chapter” this far into her career. 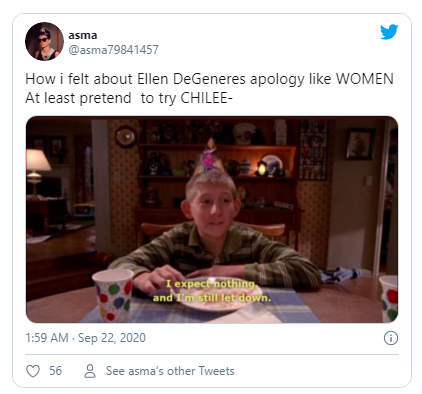 Well, at least she has apologized, unlike many other celebs who don't even give a rat ass about what people think and believe… perhaps is the time that we can all give it her a goddamn break!

Honestly, it’s been hard to defend a controversial, wealthy and occasionally annoying celeb, but the amount of bitterness we have been drawing to her is quite a lot! Hate to mention, but some of the hatred drawn to her is mostly because of the fact that she is a goofy, friendly, gay woman with a charming persona. You know the sexist mindsets out there!

While some of the accusations of workplace toxicity on her show seem legit and serious in nature, there were also some dissatisfied men who couldn’t stand a gay woman treating them as they believed she should be! For example, her bodyguard complained to the media that Ellen never said a “Thank you” to him. Like, come on man... There are few celebs that don't even give a tip while dining in a restaurant.

Yes, of course, unjustified meanness should never be neglected, but we can't deny the fact that women are being judged according to very different standards than men. I mean, I haven't seen someone come out complaining against a man for not saying a “Thank you.”

This ‘not being nice’ thing is often taken as a heinous sin when it’s a woman and entirely acceptable when it’s a man. Nobody is implying that we should ignore Ellen’s rude behavior, but we should also keep on rationalizing our sexist double standards, no?