'Stream It or Skip It'| Pieces of a Woman

One of the most tear-jerking drama films from 2020, Pieces of a Woman is coming to Netflix and it has got us super excited! The streaming platform keeps bringing brilliant art pieces to the website, making it available for its 195 million subscribers to watch.

The executive producer of this tragic movie is Martin Scorsese. One thing you should know about the film is that it's based on Mundruczó and Kata Weber's stage play of the same name. After being premiered at the 77th Venice International Film Festival, the film was released in selected theatres on December 30th, 2020. Audiences will now be able to watch Pieces of a Woman on Netflix from 7 January 2021.

If you're deciding whether to watch the film or not, keep reading this blog and you'll know exactly what to do.

According to the Guardian, Pieces of a Woman is an unflinching tale of neonatal death. It depicts a couple from Boston, Martha and Sean Carson, who is soon be become, parents.

However, their lives change irrevocably when they lose their child during home birth at the hands of a midwife. This leads to a year-long struggle for Martha, who has to navigate her grief while figuring out her damaged relationship with her husband and her overpowering mother.

On top of all that, she must also face the publicly vilified midwife in court. You can watch trailers of the film on Netflix to understand the synopsis further.

Also, check out the shocking facts about Vanessa Kirby and Shia LaBeouf!

If you're someone who decides whether to watch something or not by reading its reviews, then here are the ratings the film received over multiple reviewing websites.

On review aggregator, Rotten Tomatoes, Pieces of a Woman received an approval rating of 79%. You should know that this is based on 84 reviews; the average rating for the film is 7.1 out of 10. The critics on the website hold the opinion that after the stunning opening act, the film struggles to maintain momentum. Vanessa Kirby's performance has garnered immense praise and she portrays grief perfectly.

According to the Guardian's review written by Xan Brooks, the film can be viewed as an acting masterclass. "The film is bruisingly impressive in its way. The principal actors raise the roof; each gets to do their big turn for the camera. But it feels a little schooled, a little staged, like a workshop at the Actors' Studio; this impression isn't helped by the over-insistent score, which drops like a lead weight after each full-throated exchange," he wrote.

Pieces of a Woman got 3 out of 5 stars on the website.

Lastly, Peter Debrudge of Variety says that the film is ultimately Kirby's. She has delivered her most impressive performance till today. After reading this, we'll be watching the film for the acting, if not for the story or direction. 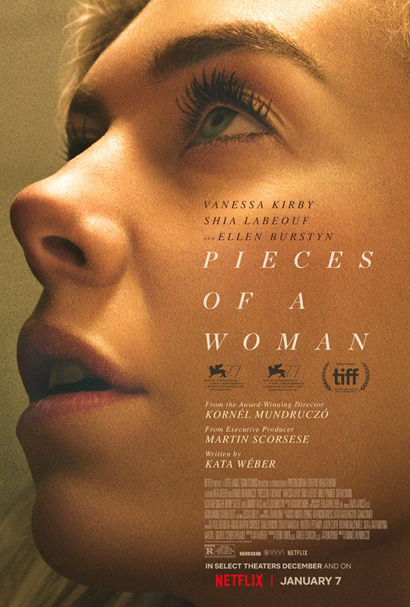 The decisions will be announced on January 11th. Lastly, the actress won the Volpi Cup for Best Actress in the Venice International Film Festival on September 12th, 2020.

Besides the great story, acting, and direction, the film's soundtrack has also received immense praise. The music featured in the film is written by Howard Shore, who is a Canadian composer and was the mind behind the legendary scores of The Lord of the Rings.

The delicate and emotional soundtrack matches the pace and atmosphere of the film. The music actually plays an extremely crucial role in scenes, such as the opening act depicting the home birth.

Stream it or Skip it?

So, to answer your question of whether to stream or skip it, we'll definitely say stream it! Many reviews say that the best part of the film is the first scene, and it's worth watching the film even if it's the only part you see. But we know we'll be watching the whole thing and crying our eyes out.

We hope this blog helped you decided if you'll be streaming Pieces of a Woman or skipping it. Once you watch the film, let us know your thoughts on our Facebook page. We've done more blogs like this on TV shows on Netflix. Check them out today!