Good Morning, folks! So far it has been a normal Wednesday for everyone… except the Swifties. These bunch of individuals have woken up only to find a crazy surprise from a crazy lady! That’s right, Ms. “Rise-and-shine, I’ve a surprise for you!” dropped a brand new single from her library called “Mr. Perfectly Fine.”

And, as expected, fans around the world have gone completely wild!

The song is believed to be about one of Taylor Swift’s exes – Joe Jonas, to be specific. Jonas is now married to Game of Thrones’ star Sophie Turner, and is now a father of a cute little girl.

Taylor Swift dated Jonas for a few months when they were both teenagers; they also attended the 2008 MTV Video Music Award as a couple. But Jonas called it quits over a 27-minute phone call, according to the “Look what you made me do” singer.

Swift announced their breakup during an interview with Ellen DeGeneres in November that year.

“When I find that person that is right for me, he will be wonderful,” she said. “And when I look at that person, I’m not even gonna be able to remember the boy who broke up with me over the phone in 25 seconds when I was 18.”

Since then, the 31-year-old singer admitted to have been regretting putting Jonas “on Blast.”

“That was too much,” Taylor said in 2019 in an interview with DeGeneres. “I was 18. Yeah. We laugh about it now, but that was mouthy. Just some teenage stuff there.”

Some fans even believed that she referenced Jonas in her latest song “Invisible String” from last year’s album “Folklore,” hinting that she is now in good terms with the singer after their breakup.

“Cold was the steel of my axe to grind / For the boys who broke my heart / Now I send their babies presents,” she sings.

Now that they are friends, the release of this song makes it even more amusing!

Anyways, “Mr. Perfectly Fine!” is a second unreleased song that Taylor has released so far. She wrote this song in 2008 after their breakup, so listeners may find plenty of Easter eggs about their tumultuous relationship all over again. After about 13 years, Taylor decided to surprise drop it online. And it looks like the singer had no shortage of nicknames for her former boyfriend.

“Mr. Perfect face / Mr. ‘Here to stay’/ Mr. ‘Looked me in the eye and told me you would never go away.” She sings. “But that was when I got to know Mr. ‘Change of heart’ / Mr. ‘Leaves me all alone,’ I fall apart / It takes everything in me just to get up each day / But it’s wonderful to see that you’re OK.”

And if that wasn’t enough to make you jump off your seat, this song has been shared on Instagram by none other than Sophie Turner! She is totally vibing to the song, roasting her husband Joe Jonas in the process – The classic Queen in the North! 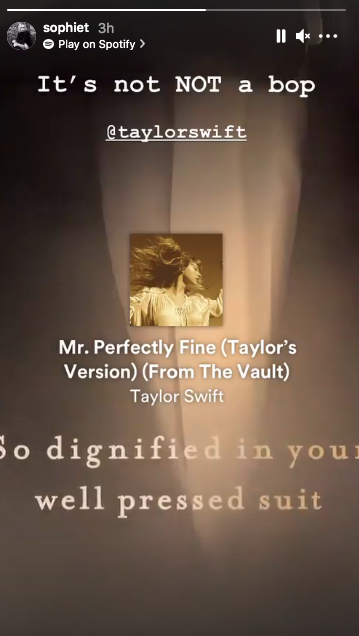 To top off the excitement, Taylor Swift is expected to release her brand new album called Fearless tomorrow, April 9th. Double treat for the Swifties, isn’t it?

Me in 2020: life is chill, writing songs based in fiction to avoid drama, feeling pretty grown up

My 2008 music from the vault, in a goblin voice: “REELEEEEEEASE MR PERFECTLY FIIIIIIINE” https://t.co/PCexr31q9x

joe jonas feeling peaceful after that line in invisible string

“Mom. Come get me. Taylor Swift wrecked me again with a new song” #MrPerfectlyFine #TaylorSwift pic.twitter.com/mALJl0VyI6

Not sure about you, but we are gonna play this song on repeat until Fearless comes out! Be right Back!