The “love the way you lie” singer has stirred up yet another controversy, this time, it involves her naked picture!

Rihanna’s topless picture sparked a wave of backlash over social media, with many calling out the singer for hurting religious sentiments and cultural appropriation even from religious figure.

Well, a topless photo on Instagram(that too of iconic diva bad girl) is sure to make things crazy, but religious and cultural appropriation; what that has to do with Rihanna’s naked picture?

Zoom a lil bit into Rihanna Instagram picture and you’ll see the exact problem that is causing fierce Hindu backlash.

In a post shared by badgalriri, she is wearing a diamond-studded pendant featuring the Hindu God Ganesh.

In the picture, which was shared both on Rihanna’s Instagram and Twitter account, the Grammy-winner singer is covering her breasts with her arms, posing in some purple accented jewelry, including a bracelet, dangling ear-rings, wearing a necklace and a pendant with a carving of the Hindu God Ganesh. 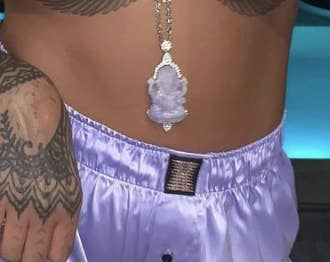 Wearing religion as an aesthetic, not cool girl!

In Hinduism, Ganesh (Also known as Ganapati, Ganesh and Vinayaka) is “the god of beginnings” and “the remover of obstacles.” Most depictions of Ganesh God show the head of an elephant with multiple arms. This God denotes wisdom, intellect and success.

Related: Why Is Tobey Maguire a Total Jerk In Real Life?

While some fans praised the singer for her bold fashion choices, believers of Hinduism, who celebrate Ganesh Chaturthi every year, find the picture super offensive and calling her out for disrespecting the holy sentiments of Hindu.

Here’s how people are reacting over topless Rihanna photo:

“Why is Rihanna’s company doing a lingerie photoshoot outside a Hindu temple and she’s wearing a Ganesh pendant as an accessory?” one Twitter user said after Rihanna topless photo went viral.

While highlighting all the artists that disrespected Hindu sentiments previously, a Twitter user asked, “How hard is it to respect and not appropriate Hinduism for your own personal gain?”

“It’s 2021 and by now, we should all understand that religion is not an aesthetic,” this person tweeted. 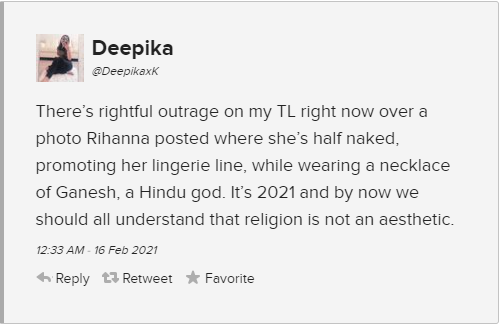 “It’s not okay for Rihanna to use Hindu religion as an aesthetic,” says a disappointed fan.

“Ganesh is a holy sentiment to millions of people celebrating Ganesh Chaturthi every year,” said a believer who called Rihanna photo “super offensive.”

One of the fans stated that Rihanna’s derogatory attitude towards Hinduism should not be condoned or defended!

A disappointed said, “You can love Rihanna and still call out, btw.”

Another fan shared her disappointment with the artist saying, “Rihanna’s appropriation of the Hindu God Ganesh is something I never thought I would see.”

Others said that cultural and religious appropriation is unacceptable even for a non-believer.

“Hindu appropriation is not an aesthetic,” says another user.

You gotta respect one’s religion, especially when you’re a celebrity.

The singer has been called out for doing a lingerie photoshoot in Hindu’s sacred praying place, “Mandir” or Hindu Temple.

“Wearing a Ganesh pendant whilst half-naked with absolutely no knowledge of the cultural symbolism it carries, disrespectful as fuck,” says another Twitter user.

Rihanna offensive picture comes right on the day when the Hindus were celebrating Ganesh Jayanti.

“Grow Up,” says another angry fan.

An angry Hindu believer called out Rihanna for a “sick mindset.”

Fans have lost respect for the singer after her derogatory lingerie photoshoot at the Hindu temple.

Related: Celebrities Who Are Total Jerks In Real Life.

This isn’t the first time. Umbrella singer has pissed off many nations for religious and cultural appropriation. Last year, she used a song that features Islamic religious verses in her Savage X Fenty October 2020 show, which offended many from the Muslim community. The backlash led the singer to apologize in her Instagram account.

Will she also apologize to the Hindu community? Stay tuned to Hayvine and like our Facebook page to get the latest updates about this story.