Remember the time when New York went completely bankrupt? Well, evaluating the current situation, it seems like we might be heading back to the 1970s!

It seems like New York is in dire need of $5 billion, because without it, around 22,000 workers would lose their jobs. The troubling finances have forced Mayor Bill de Blasio to opt for a loan from the State Legislature, as he continues to think long and hard about the ways he can

overcome the problem and mend this large vacant hole. 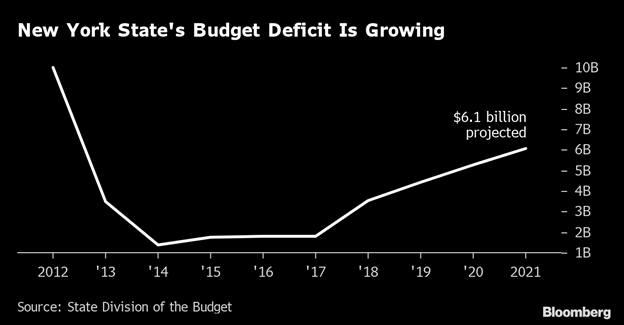 The pandemic broke New York. Now the only way to recover and get this multifaceted city back on track is to work hard and generate revenues. The city can be saved by federal aid, but the journey is long and can take up months.

Any economist or finance expert would recommend against this decision, as the cost of dollar increases over time, making it even harder to repay. However, this may play out well as a means to control short term crisis.

It’s of paramount importance for this urgent lending to be backed by a solid plan and strategy that aims to stabilize the city finance. If things rupture in between, the plan can easily backfire, leaving the burden of the bills on the next generation.

Thus, it’s crucial that Blasio depends on savings before adding billions of debt to the city’s account – and mind you, it won’t be a piece of cake.

It’s unfortunate how the city’s budget had dramatically grown under Blasio’s shadow, and that too, in a matter of years. In 2014, when he first entered the office, the city budget was roughly around $73 billion, and last year it went a little over $92 billion. The mayor has been incompetent as he had only made matters worse by hiring more and more employees throughout his tenure. This adds more weight on the city’s pension and retirement plans.

Now to protect the livelihoods of New Yorkers, Blasio has to be creative – and even try being unpopular for once. He must try and make way for stringent cost-saving measures without forgoing transactions from big organizations to small municipal unions.

For example, if the city tried hiring 7,500 fewer workers every year, it may find a solution for saving $750 million annually. Thus, the hiring and recruitment proceedings need to freeze. In addition, the mayor must convince the labor unions to add their share in the sacrifice, as it will save roughly a quarter of a billion dollars every year.

Nicole Gelinas has figured out a way to save $200 million every year as well! This conservative thinker is a senior fellow at the Manhattan Institute, and she believes that there needs to be a $150,000 salary cap on the nonunion workforce.

Furthermore, there must be a strict budget when it comes to overtime payments at the Police Department – it helps in saving nearly $350 million every year.

Laura Feyer has spoken on this matter in an email. She is the spokeswoman for Mayor de Blasio.

She stated that it is hard to get out of this pandemic budget hole. Also, we don't want to make hard choices like borrowing. However, we would prefer discussions with unions in order to avert maximum pain and we all agree that long-term borrowing is indeed the best solution.

No matter what happens, we must take all precautions to save this city – leaving millions of New Yorkers stranded like orphans will not only damage the city, but it would also count for deeper ramifications for the whole country.