Do you recall that viral video of a rat dragging a pizza slice down the famous stairs of the New York subway station? The short snippet is practically a meta-performance that provides a more faithful description of the city than any other guidebook.

The video went viral after Matt Little shared it on YouTube in 2015. And you know what the best part about the video is? It’s the sheer determination of the rat to drag the slice down the stairs. Anyway, recently, a somewhat similar video has gone viral where an artist is recreating the moment, and everyone is sharing it and having a good laugh.

The laugh-out-loud video of the performance artist Buddy the Rat, Jonathan Lyons was actually shared by an American basketball player, Rex Chapman. He added a caption saying “I love New York (sic)”.

In the video, Lyons is wearing a huge mouse mask and has paired it with a nice pair of shoes and body costume along with gloves. He is seen crawling down the subway stairs and literally dragging a large pizza slice along with him. The performer then shared that video on his social media account and coined the term Pizza Rat.

Now you can’t deny that the replication is hilarious and as funny as the original video. In fact, it gets repeated every year as netizens are just not getting over it! Chapman has actually shared the video from a different angle and has captured the moment when the commuter that is walking downwards jumps from the railing once he sees the Pizza Rat. Both videos are being shared and appreciated on social media, leaving the online users amused and entertained.

The video has brought several quintessential New York artefacts together: a pizza slice, NYC subway performer, and the famous NYC rat. Also, you get to see a variety of reactions from the onlookers, which honestly will be the highlight of your day!

Ever since 2015, when the first video leaked online, a trend has started where New Yorkers recreate this clip almost every year. Sometimes, a Pretzel Rat or Egg Muffin Rat is also spotted. You might have also come across a hipster Avocado Rat at the Brooklyn Greenpoint Avenue Station a couple of years ago.

However, we’ve got to admit that Pizza Rat remains the OG. In fact, people have tried their best to give it a run for its money – it’s the gold standard, you see. You may occasionally come across a doppelganger sometime again this year (possibly with a facemask?).

Jonathon Lyon has shared his experience with the “fans” and has said that they display one of the three topical emotions: they’re either overwhelmed with fear or they’re joyous and pounce at him… or they’re completely indifferent (oh, New Yorkers!)

People talk about the residents of New York in a very unique tone. No matter what the context, the response is always “only in New York”. And the observation is possibly an honest one. Like, you could be having a regular day, walking down the street, and come across some something totally berserk, and give no reaction to it whatsoever. There’s this vibe, more like a belief, that says that anything can happen in New York.

Honestly, Lyon’s Instagram screams that he’s New York’s biggest fan! You’ll see many posts of iconic New York locations, including the Brooklyn Bridge, Time Square, and the NYC subway, etc. In fact, you may also see Buddy on Lyon’s Instagram feed where he has shared a short film directed by Todd Strauss-Schulson (you may know him from Isn’t It Romantic and A Very Harold & Kumar 3D Christmas)

Little known fact: the short film will soon be released on his official YouTube channel on Thanksgiving!

He has said that it’s an incredibly surreal moment for him as the film captures the essence of New Yorkers who’re literally cooped inside for months because of the pandemic. He’s also said that he’s excited and ready to celebrate and send out hope to anyone who may need it. He’s the glass half full type of person, you see.

Just like the majority of New Yorkers, Lyons is from Scottsdale, Arizona – a non-native. He’s an aspiring actor and puppeteer who graduated from college back in 2005. He has no plans to leave the city and his love for New York is truly contagious!

Okay, let’s discuss the significance of the rat in New York. If you’re not from New York, you must wonder why people are so obsessed with the rats there. Well, the truth is that they are everywhere. You will even find them in densely populated areas, and the number is so large, that it’s almost impossible to suggest an estimate. 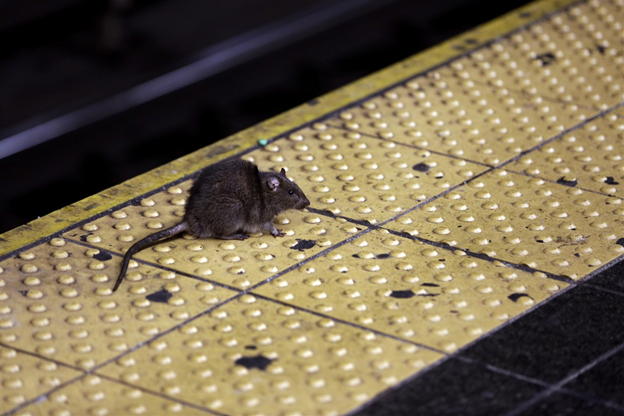 According to an urban legend, the count of rats is five times the number of people. Anyway, some researchers claim that the number goes up to 2 million, but hey, we all know that’s bullshit.

These rats aren’t sweet or worthy of being pets. On the contrary, they carry pathogens and are responsible for causing diarrhea, vomiting, and fever along with cat scratch disease, trench fever, and what not. In addition, these rats carry disease-causing viruses (and God knows we’re tired of hearing the V-word!). And let’s not forget allergies that are caused by rodent hair and feces (UGH!).

Most New Yorkers make rodent complaints online and the NYC Health Department inspects private as well as public properties for rats literally every other day. People are even fined in case they fail to deliver the notice served by the department. All in all, the problem is pretty bad, but hey, the love New Yorkers still have for the city is undeniably infectious!