At least now, we have something to fight against Godzilla!

Based on an iconic anime series, a giant robot, Gundam has made its first move in the Japanese city of Yokohama.

It weighs 25 tonnes and stands just over 18 meters tall. After years of arduous work, the giant Japanese robot showed its fans that it can actually move!

Inspired by a robot from “Mobile Suit Gundam,” an infamous TV series from the late 1970s, this massive machine was seen walking, kneeling, and waving in a video of the test uploaded on Twitter on Monday. 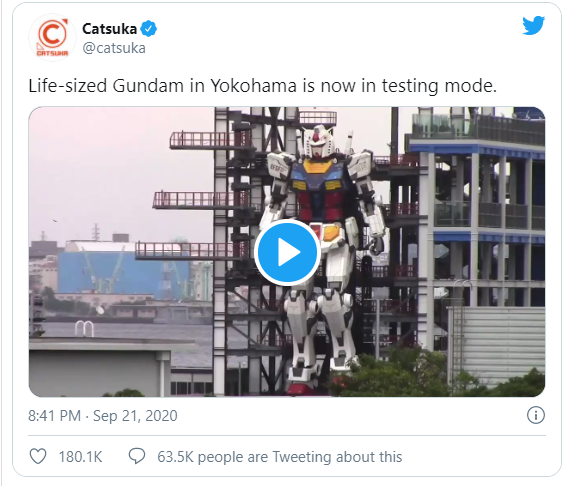 This life-sized robot was ready for becoming the main feature of Gundam Factor Yokohama, south of Tokyo on 1 October, but thanks to the ongoing pandemic, the official unveiling is not going to be until later this year, according to the company’s website.

“We apologize to all of our fans who were looking forward to our grand opening and ask for your understanding. In the meantime, we will be making preparations so that all of our visitors can enjoy themselves in safety.”

The engineer of the multibillion-dollar company Gundam franchise reportedly initiated the designing process six years ago to make sure each piece adjusts to the weight limit, to prevent its limbs from buckling, and to ensure all the parts move smoothly.

And till this day, fans across the world are completely head over heels for the anime series.

So, who’s heading to Yokohama to visit the giant robot?