So, it turns out Microsoft was one step ahead of leakers...

Earlier this week, the Xbox Series S might have been leaked online before its official launch, but Microsoft was placing easter eggs in plain sight for months. It was us who didn't figure them out!

Phil Spencer, Xbox chief, appeared in several interviews in July, prior to Microsoft's Xbox games launch, and he placed an Xbox Series S on the shelves placed behind him.

The official Xbox account spilt the beans in an attempt to roast leakers, and Spencer said that the Xbox Series S was already there in around three youtube video interviews aired in July.

What a cheeky Xbox surprise…

But it's the first time the company has pulled such a stunt, in fact, Microsoft usually hides codes and secrets as teasers before its console launch. 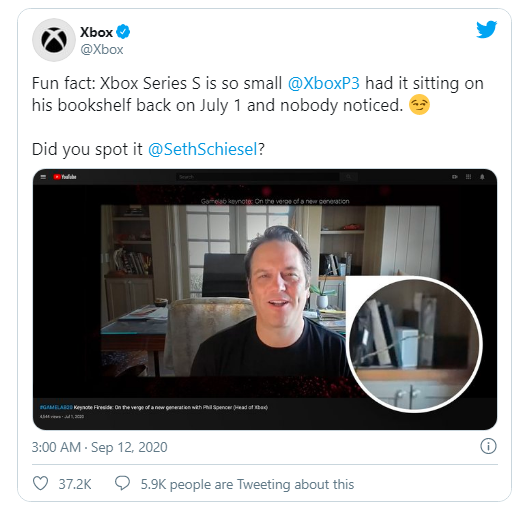 Microsoft hid a lot of Xbox One X console easter eggs in various videos that indicated its six GPU performance's teraflops in 2017, ahead of E3. Microsoft also revealed the Xbox Series X, in E3 teasers in 2019, under the codename Scarlett.

Microsoft had no other option but to announce the Xbox Series S ahead of time, after the console and it's $299 price leaked online.