So, it's that time of the year again when Melania Trump has to give some f*cks for the Christmas Decorations…

It's not me saying; it's actually how Melania Trump describes Christmas Decoration in her own wordings…

"I’m working…. My a** off on the Christmas stuff that you know, who gives a f*ck about the Christmas stuff and decorations? But I need to do it, right?” said the first lady during a conversation with a senior White House advisor who leaked the tapes online.

The tradition involving the first lady overseeing holiday decorations has been carried out since 1961 when Jacqueline Kennedy decorated a Christmas tree with ornaments from the “Nutcracker Suite.”

Well, this is the last time Melania Trump has to put up with this tradition and decorate the White House for Christmas before the Bidens take control of the sleigh!

That means it’s hopefully the last time we’re going to see a bizarre, cheesy video of Melania forcefully walking through the newly decorated halls of 1600 Pennsylvania avenue… and probably the last time she’s going to give f*cks to the Christmas stuff.

In a video uploaded on Twitter on Monday, Melania Trump unveiled this year’s theme, “America the Beautiful,” reflecting it with green trees decorated with red, gold and silver ornaments, shining white fairy lights and classic-looking floral arrangements. This style looks so traditional and cliché that it could be a set of Netflix’s next holiday-themed movie!

We gotta admit this; she played it safe this year! The unique (more like daring) aesthetics choices that sparked so much criticism and memes in Melania Trump’s last White House Christmas are noticeably absent. Remember those blood trees in 2018? Those blooded red cone trees in the halls looked like they have been plucked straight outta The Shining. Some publications even called it “creepy”, “worst Christmas decoration” and “deeply haunted.”

And let’s not forget those dark, icy branches of 2017’s Christmas decoration that transformed East Colonnade into a spooky and abandoned landscape. In 2017, she chose to line the walls with massive bunches of white twigs. Though it looked quite gorgeous during the daylight, at night, those trees were nothing less than a nightmare before Christmas.

Surprisingly, this year’s Christmas decoration conflicted with her inner “who gives a f**k about the Christmas stuff” spirit. I mean, she did her best to play safe as she could!

And honestly, we all were hoping that Melania would use this final unveiling to express her true self with her bold aesthetic choices like fully black decor or perhaps something bloody and or something like a hideous leg lamp from Christmas Story, but no! She played it safe…

Memesters can’t meme this theme, for sure! And that’s what we’re going to miss about her the most- no Melania in the White House, no memes…

Melania’s 2020 decorations feature a toy train, which she called the “White House Express,” placed on a center table. Don’t be surprised! 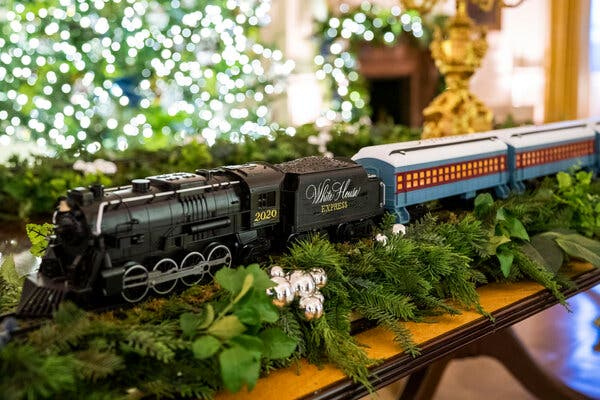 Trees are decorated with ornaments dedicated to children across the country, such as Maryland, Michigan and the Northern Mariana Islands. 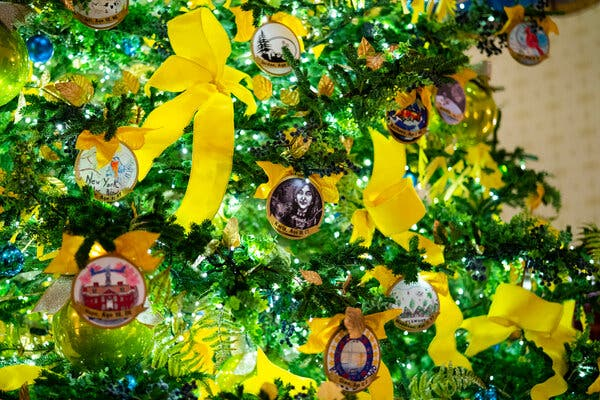 Other decoration heralded “pioneers for gender quality,” as to how the first lady describes it.

Reflecting on a 2020 sentiment, the first lady attempts to keep things emotional with the Christmas decoration, which is quite wonderful… the 2018’s blood-red trees in halls have now been replaced by large plants in black pots. It’s sort of depressing and not very jingly if you ask me, but as long as it doesn’t give us the horror movie vibes, it's fine!

It feels deeply insulting seeing how Melania has incorporated a COVID-19 themed shiny, fake snow-covered hospital decoration considering how her husband’s reckless attitude toward coronavirus has cost the lives of over 265,000 Americans. She also decorated it with ornaments of a garbage truck, a nurse’s hat and a lab coat, aimed to pay tribute to the frontline workers in the pandemic.

So far, Mrs. Trump has received commendable reviews for her final Christmas decoration at the White House:

People praised Melania for incorporating an ornament featuring a portrait of President John F. Kennedy and sailboats on a tree in Vermeil Room. Another tree in the library dedicated to the 100th anniversary of the 19th Amendment, which gave women the right to vote for the first time. She has surely given significant thought and detail to the Americana decorations.

Another publication wrote, “Ms. Trump and an army of volunteers put together a warmer less edgy display that runs throughout the Executive Mansion.

All in all, Melania sucking her hatred up and decorating the White House one last time without becoming a meme deserves the slightest bit of our appreciation. What do you think?

But if you're still missing some fun memes on our EX First Lady, check this out!